Dr. David Skirvin’s Financial Analysis in Sport class took a break from the classroom last Friday, October 27. I, along with other fellow graduate students, took an educational field trip to Indianapolis to visit several prominent sport venues and organizations.

The first stop of the day was Banker’s Life Fieldhouse, home of the Indiana Pacers and Indiana Fever. We took a brief tour of the facility, and the host for the day was Nic Hendrix, Director of Consumer Sales and Service for the Pacers. After the tour, we participated in a small panel discussion. We had the opportunity to ask other Pacers’ representatives, particularly those in ticket sales and accounting/finance, specific questions. Topics such as pricing strategy, alternative revenue streams, and sales techniques were discussed. 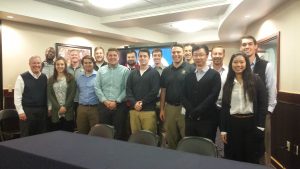 The second stop was the NCAA headquarters. Here, we participated in a working lunch meeting with representatives from the NCAA, MainGate, Indiana Sports Corp, Indianapolis Motor Speedway, and Lucas Oil Stadium. Small table discussions provided a more personal, small group feel. I sat at a table with Chris Panyard, Director of Events at Indiana Sports Corp. The best part of this event was the diversity of the participants and wide range of experiences and insights they had to offer. Licensing, personnel management, and general career advice were some of the topics discussed. Before we left, we took a brief tour of the Hall of Champions and explored the history of the NCAA. 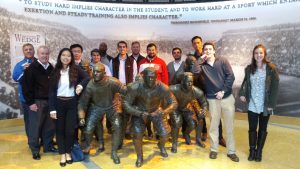 The “flying wedge” is what prompted the founding of the NCAA in 1906. Football players would form a v-shaped wedge and run as hard as they could toward each other, resulting in serious injury and even death. Theodore Roosevelt noticed the violence of the sport and ordered an organization be formed to regulate it and promote safety.

Our last stop of the trip was Lucas Oil Stadium, and it was my favorite of the day. I have attended Colts’ games and Indiana High School State Football Championships at the stadium, but I had never appreciated the size of the facility until after our tour. Lucas Oil is a world-class facility that is capable of doing “anything.” Our guide for the day was Eric Neuburger who is an IU alum and worked for IU Athletics prior to becoming the Facility Director of Lucas Oil Stadium. He used a phrase similar to this multiple times: “We can do anything we want here.” I have no doubt that is true. From concerts, graduations, monster truck shows, motor cross events, football games, basketball games, you name it, Lucas Oil can host it. We had the opportunity to explore the facility in depth. We toured the Colt’s locker room, the press box and stadium control center, suites, and even got to step on the field itself. Facility management is an area I was not interested in prior to the trip, but now I have a new perspective and interest in this field. 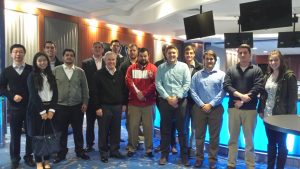 Our tour of Lucas Oil Stadium concluded in the Quarterback Suite. When the Colts are not playing, this suite is used for wedding parties, workshops, meetings, and other events.

I am thankful Dr. Skirvin sees the importance of networking with and learning from professionals in the industry. Dr. Susan Simmons, Director of the Office of Career Services with the School of Public Health, also helped organize the trip. This is one of the many examples why the Master’s in Sport Management program, the School of Public Health, and IU as a whole are all amazing. I am thankful for opportunities like this as a student. Indianapolis is one of the most renowned sport cities in the WORLD, and it is only a few miles away. I encourage anyone interested in a sports career to take advantage of this opportunity!