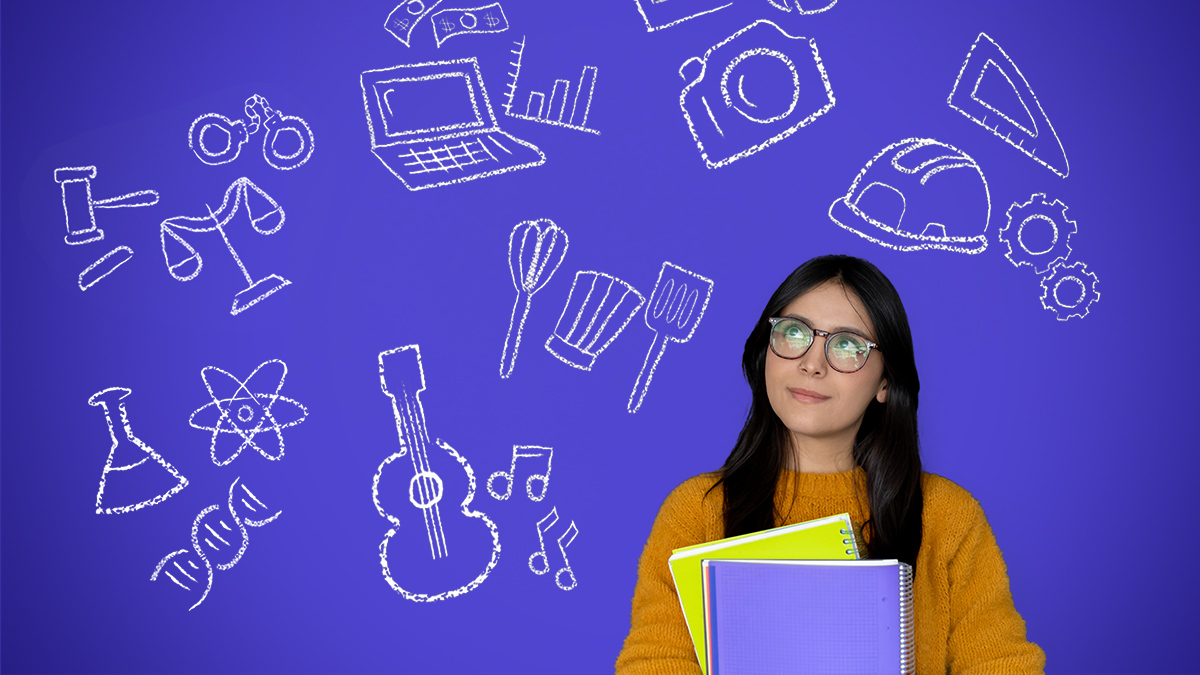 What do you want to be when you grow up?

Remember being asked this question by various adults when you were a kid? It seemed cute and innocent enough. Maybe you said you wanted to be an astronaut. A professional soccer player. A teacher. Maybe, like me, you watched The Sound of Music too many times and wanted to be a singing governess for seven children in Salzburg.

At some point, though, this innocuous conversation starter morphs into a more serious inquiry — from parents, professors, friends, and others:

What are your plans after graduation?

Some people know the answer early. Maybe it’s even the same as when they were a kid: “I’m going to medical school,” or, “I’m going to be a financial advisor like my mother.”

Others become filled with dread and panic when asked this question.

Back in my university days, I was firmly in this second group. And, frankly, I was annoyed about it. It seemed that for my whole life up to that point, adults had been telling me to be “well-rounded” and to take advantage of the wide variety of options available in classes, extracurriculars, and social experiences. And now, at some unbeknownst-to-me moment, the message changed to: Pick one thing to focus on for the rest of your life!

How was I supposed to do that?

I think my attempt to answer this question is one of the reasons I became a Resident Advisor my senior year of college. Maybe if I committed to helping other students deal with their challenges, I could figure out my own. As Adam Grant, the writer and organizational psychologist at Wharton says, “One of the most effective ways to get better advice is to give it.”

Here is the advice I found myself giving to younger students about choosing a career path, advice that I now give in my books and speeches, and advice that I ultimately followed myself.

Shakira’s song nailed it when she said, “Nobody learns without getting it wrong … I want to try everything. I want to try even though I could fail.” Besides really liking that song, I still believe in being well rounded — but with a twist. Don’t try everything in an attempt to be good at all of it. Rather, try everything in order to rule things out and inch closer to the best choices for you. You will never know whether a particular path might be a good or bad fit until you actually experience it.

For example, I have always enjoyed and had an aptitude for writing and public speaking. This led many advisors and career assessment tests to recommend that I become a lawyer after college, because lawyers do a lot of writing and speaking.

So, I tried it. I registered for a constitutional law class and asked a family friend if I could spend a day at her law firm, just observing. I learned that law does involve a lot of writing and public speaking — mostly in client meetings, but also sometimes in court.

Here’s what I also learned: Constitutional law classes and working as a lawyer often involve a lot of arguing and contentious conversations.

And you know what? I hate arguing and contentious conversations. More than I love writing and speaking. If I hadn’t tried actually experiencing law (as opposed to the idea of law), I might have wasted hundreds of hours applying to law school and thinking about being a lawyer, a career that would have made me miserable. (By the way, there is nothing wrong with being a lawyer; it’s just not a fit for me.)

Today, whenever a young professional asks me for advice because they have ended up in a job or career they hate, my answer is always, “Congratulations!” Now you can rule that out and move on to experiencing something else!

Law was out for me, so what did I try next? One day I heard about an informational session on campus about Fulbright Scholarships, the prestigious program that sends Americans abroad to conduct graduate research in another country. I knew I probably didn’t have the grades or the scholarly credentials to actually win a Fulbright, but going abroad sounded amazing, so I went to the meeting. (I’m sure there was pizza, too.)

I sat through about 99% of the meeting and learned that I definitely didn’t have the grades or the scholarly credentials to win a Fulbright. But my attraction to the idea of going abroad after college kept me in my chair. And then, at the very, very end of the meeting — honestly, I think people were packing up to leave — the speaker mentioned that there were other study-abroad graduate programs besides the Fulbright “for students with less of an academic interest and more in search of a cultural experience.”

My ears perked up and I jotted down the speaker’s recommendation: the Rotary Ambassadorial Scholarship, a one-year program that involved academic study in another country, but combined it with participation in a local chapter of Rotary International, a business networking and service organization.

I’m tempted to write, “The rest is history!” But that wouldn’t be true. I spent many more months hemming and hawing and flipping through job listings at the university career center in industries like marketing, public relations, and political lobbying. I even bought a practice book for the law school admissions exam, because apparently it takes me a while to learn important lessons.

Finally, about six months later, I dug up my notes from that Fulbright meeting and filled out an application for the Rotary Ambassadorial Scholarship. And about six months after that, I received a phone call that I had won the scholarship and would be attending graduate school and be hosted by a sponsor Rotary Club in Melbourne, Australia.

Here’s the best part: While I knew that graduate school would involve a lot of writing, what I didn’t know when I applied was that a requirement of the Rotary Ambassadorial Scholarship involved delivering speeches to local Rotary clubs in my host country and when I returned to the U.S. I had stumbled on a post-college opportunity that involved both writing and public speaking, my original passions. More than 20 years later, I still make my living as a writer and professional speaker on career and workplace issues, with a special focus on early career professionals. (And I’m still not a lawyer.)

One other funny thing: Another student I knew in college, we’ll call her Anya, did have the grades and the scholarly credentials for a Fulbright Scholarship, and she won one. After college, she went to London on a Fulbright. As it so happens, she hated it. I remember sitting in my room in Australia reading a post on Facebook that Anya had quit her Fulbright program halfway through. I’ve heard she is now a professional musician.